For a long time now I’ve been saving up for a new mixer. I recently bought a used PSC Alphamix from Trew Audio, but it was doing some weird stuff when it was first powered up (one channel appeared to be -6dB down at the output for about 20 minutes, and then it “fixed itself…”) I can’t take a chance of that happening on the set, so I returned it to Trew. Unfortunately, I discovered that the Alphamix is no longer being made, so a new unit was out.

When I was in Nashville for the Mix Nashville conference, I stopped  by Trew Audio to talk about my options. Rob Milner suggested a Sound Devices 442.

The Sound Devices 442 has a very high build quality and a number of useful controls and features.

Sound Devices has a reputation in the industry for building some of the best equipment in the business, and this mixer has a number of features that make it a valuable and flexible tool. Of course, being able to mix four audio sources via an over-the-shoulder bag is handy, even though most mixing jobs are admirably covered by my trusty Shure FP33. And though I’ve owned a Shure 4-channel mixer (the FP42) for awhile, the 442 is really a different beast altogether. 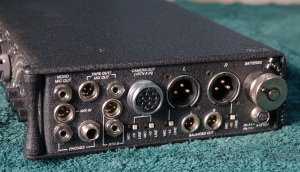 The output side of the mixer. The battery tube has a badly-designed spring on the positive end that can short out rechargeables.

The primary reason this mixer was purchased is direct outputs on each channel…  in addition to sending a mixed signal out, I can also record each individual input on my R4Pro 4-track recorder.  I normally record audio for film directly into the R4 or mixed straight to camera, but with the 442, I can record four iso channels on the R4 while mixing to camera at the same time.

The build quality on all Sound Devices equipment that I’ve used has been stellar, but every Achillies has his heel. On this mixer, it’s the battery tube. It’s not correctly designed, with a spring at the POSITIVE end of the tube. All other battery holders have a spring at the NEGATIVE end. With some rechargeable battery types, this spring can short the battery to its case, burning up the battery and leaving the mixer useless. Even though  the manual says you can use rechargeables in this mixer,  I NEVER use rechargeables with anything Sound Devices makes! I know from experience, it happened to me with a brand-new MM1 preamp (that uses the same type of AA battery tube holder. At first, they wanted to charge me $100 for a repair. Eventually, they fixed it without charge, but it was a surprising and disappointing customer support experience. Even though I vowed not to buy Sound Devices after that, there really aren’t any other options that have direct output capability. I’m avoiding the battery tube altogether by using an NP-1 battery cup with a custom-built cable and case to power the mixer. Standard alkalines go in the tube as a backup for the main battery. (look for a how-to-make-it post on these subjects later.) 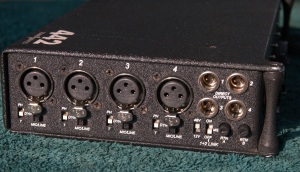 The big reason I bought this mixer are those four little TA-3 connectors on the right. These direct outs can go to the Edirol R4Pro input, allowing four tracks of isolated audio to be recorded while mixing to camera AND a 2-track backup recorder!

The 442 has been discontinued in favor of the 552, which features a built-in 2-channel flash recorder. A number of the 442s can be found on the used market. I bought mine from Trew Audio in Nashville, and I highly recommend them as a supplier.

I’ve used this mixer on several shoots now, and I really like it. the LED metering is daylight-visible, and just about every parameter can be adjusted to suit my particular workflow. It’s a big improvement to my gear list.

One response to “Sound Devices 442 Mixer”