Here is a list of random tips, suggestions, battle stories, etc., about capturing higher-quality sound. They aren’t necessarily restricted to location audio only… since I’ve done a lot of studio recording over the years, I may toss in the occasional tip for recording music as well, though I realize most folks reading this will be interested in getting better field sound for visuals. These aren’t in any particular order, and will come from a number of different sources, including you. Send in your favorite tip to hammerguy at bellsouth dot net if you’d like to share it here. And please, allow me some time to get this page populated… it’ll be a little skimpy at first, but will hopefully grow as I can find time to write. 1. Always Have A Ground Lift This might be a simple tip for many of you, but here’s how I nearly learned it the hard way. Scene is 20 years ago, and I was working for an ABC affiliate station not long out of college. I had been hired by ABC network to set up a sattelite shot for Good Morning America. We got to the site at 4:30 AM, and ABC had sent a KU band satellite truck down. I had a Shure 4-ch mixer to mix the interview mics, and got the mics laid quickly, since air time was approaching fast. When I went to plug in the mixer to the truck’s snake, POP! An arc of electricity about a half inch long jumped from the pins on the XLR to the cable. I’d never seen that before, and I knew it was NOT good. There’s twenty minutes to our satellite window, and ABC has spent I-don’t-know-how-may-THOUSANDS-of-dollars to set this up, and we have no audio thanks to yours truly. A panicked phone call from the producer to ABC engineering, and they put me on the line. “Do you have a ground adapter?” I did. (this is one of those 3-pin to 2-pin power adapters that you can get at the hardware store) “Try that and see what happens…” It cured the problem with about ten minutes to spare. I always keep several ground lifts in my kit… some to use, and a few for good luck charms. BG 2. Fashion Tape There are several options that you have when it cones to taping mics and cables to talent. For taping on skin, “fashion tape” works well. This is generally double-sided, clear tape. it’s hypo-allergenic, and if it’s applied dry, sticks pretty well if the talent starts to sweat. There are several different sources. Victoria’s Secret sells it for lingerie, to keep blouses from becoming too revealing. (And since most sound people I know are men, we’re always looking for an excuse to go into Victoria’s Secret. The IRS may give you a hard time if you claim this as a business expense, though.) “wig tape” is almost identical, far cheaper, though less of a conversation piece in your kit. Topstick is a typical brand, available from Trew Audio. I usually use Moleskin, and the word is that you want to use the genuine article from Dr Scholl’s, cheaper house brands don’t stick as well. Also handy are Rycote Stickies, available at Trew. These are double-sided tape dots that come with a precut felt cover. They’re pricey, but they work well. I also keep a roll of black and a roll of white grip tape (the real stuff, not cheap substitutes that leave a gummy residue) in my box, and it always seems to get used. I have some first aid tape as well, though this seems to get used far less than the other types. And a roll of GOOD electrical tape comes in handy. Get the real stuff, like 3M 33. Cheap electrical tape oozes glue all over the place in a very short time and creates a real mess. For a really inexpensive alternative, you can also try basting tape, like “Seamstick.” It comes on a large roll… one is more than you’ll probably use in a lifetime. This is another clear double-sided rubber-based tape that is designed for holding fabric together before sewing. I bought mine from Sailrite. This stuff is REALLY sticky, and I only use it when everything else fails… it can sometimes be difficult to remove. 3. Cheap Cable Wraps

Cable wraps like these are cheap enough to lose

This one comes from my friend Dave Porfiri, producer/DP at Mindflow Media. Dave teaches a film PA class at Chattanooga State, and has a long film background. These are those little bands that young women will use to tie back their pony tails. They can be hard to find, but they’re dirt cheap when you do, so grab a bunch. A more expensive version of the same idea is sold as “Bongo Ties.” 3. Easy Wireless Cases 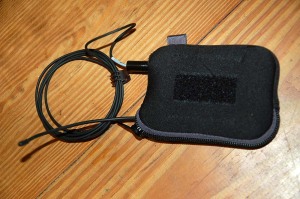 A neoprene wireless case that cost under a buck from Staples

Just after school started last year, I found these little neoprene cases at Staples– I think they were labeled “Binder Gear” or something like that– and they were trying to get rid of them, since they didn’t sell in their normal “back to

A small hole is cut in the corner for the mic input, but other than that, they’re ready to use

school” sales rush. I bought all that were left, three of them. It turns out that they are the perfect size for Sony UWP transmitters and Sennheiser EK100 transmitters and receivers. They’re modified by cutting a small hole in the corner for the mic input jack, but that’s all they need. They also had a small patch of velcro material underneath an elastic band. The band stitching was easy to remove, leaving the velcro. The cost was under a dollar each. Easy Wireless Cases Part Deaux I found some other cases at Sears. These are Craftsman small

Craftsman cellphone cases from Sears are a perfect fit for butt-plug type transmitters.

cellphone cases. They come with a belt clip that can be kept or removed if you want. These also need a slight bit of modification… in this case, a hole was cut in the top of the strap and the raw edges were sealed with a match. The result is a case that will fit Lectrosonic plug-on transmitters as if they were made for it. But that’s not the only use for these… they are a perfect fit for my Sony UWP transmitters as well. The cost is about five bucks each.

These same cases make a perfect fit for the Sony UWP receivers if a bit of the fabric is cut away.

As much as wireless systems cost, it’s a good idea to protect them with some sort of case. True, a case does add some bulk, and sometimes that isn’t helpful. But in those situations, I just slip the transmitter out of the case and into the talent’s pocket. I’m still searching for the perfect low-cost case for my Lectrosonics receivers. I haven’t found it yet, but the hunt continues! Weird Mic Protection It seems strange that audio types look for solutions to problems in ways that are connected to sex. This isn’t my idea, I promise… it came from an article in a recent edition of Broadcast Engineering. the story goes like this. A news shooter submitted an expense report that included, among the usual gaff tape and lunch bills, a receipt for a half dozen unlubricated condoms. Needless to say, this caused quite a stir with his manager back at the station. It turns out that the shooter was working in a driving rainstorm, and the condoms were used to protect the mic from the rain. The sound was altered, of course, but it worked. The oils in a lubed condom would certainly be bad for the electronics, though, so be sure to get dry ones. I suspect that this shooter was using his mic clamped to a camera, though, as I’m certain that using a boompole, talent would find delivering lines with a condom hovering inches from their face to be distracting to say the least. Then again, delivering lines in a downpour is distracting as well, so it might make sense.

If you have any tips, hints, or suggestions, send them along!