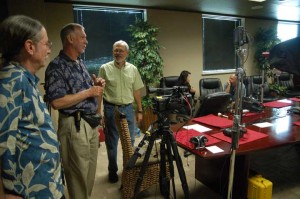 These three jobs couldn’t have been more different. The political spot was shot with the Red camera, the Canon production was shot with a Sony HDV camera, and Chris’ film was shot on a DSLR. The sound was different as well. The first two were single-person on camera, no two shots or complex dialog arrangements. These were shot with shotgun mics only and sent directly to the camera– no mixing necessary.