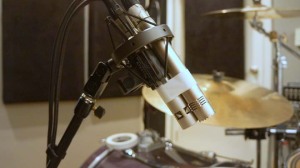 Last week I sent the small-diaphragm condenser mics from the post below to a friend in Nashville, John Billings. John’s been working in Nashville for years as a session bass player, and  has a very nice studio. I only wanted his general impression, but he went the extra mile and set up a quick A/B test during a recent session. Here’s what he had to say:

I’ve been meaning to upgrade my WordPress account for quite awhile now, but John’s efforts gave me the final push. Now I can post these files here so you can hear the results and judge for yourself. First, the snare drum solo using the stock, unmodified CM90:

And next is the modified mic:

Now the same two mics placed further back as a room mic on a full drum kit. Again the stock mic is the first sample:

And now the modified mic:

John’s studio is equipped with Genelec monitors, so he’s able to hear things very accurately. I listened to these samples on the best headphones that I have, a pair of  AKG 271s, and on my KRK Rokit 6 studio monitors as well. I noticed a slight drop in level on the modified track, and raising this a touch in Mixbus gives more closely-matched tracks in terms of level. (As you probably know, you’ve got to have levels very close when doing A/B comparisons. In blind tests, people always select a source that’s slightly louder as the better track. )

I tend to agree with John. I’m hearing an overall improvement in freq range, with a touch less upper-midrange and an increase in overall smoothness. It’s a subtle improvement… but when comparing them side-by-side, it’s noticeable.

But something that I always find surprising is the fact that really, these mics aren’t all that horrible right out of the box. I’m showing my age here, but in my studio days you couldn’t even approach this kind of signal for less than three or four C-notes. Sure, the quality control isn’t there… for example, the tiny screws that hold the mic body in place are chewed up and look like they were forced together at the factory… but I can’t really complain given the list price.

In order to make some proper mic comparisons, I’m going to have to buy a proper reference mic, so I’m currently selling some excess gear to buy a Neumann KM184. I’d rather have a vintage KM84, but they’re just much for my current budget to bear…maybe someday. And I’m also on the hunt for an affordable BV107 (or perhaps a suitable equivalent) mic transformer… I want to experiment with a transformer-balanced version of the above mod.

This entry was posted in mic mods, Microphones. Bookmark the permalink.