How To Make Turtle Clips

I can hear you. You’re saying, “What the #%*& is a turtle clip?”… a reasonable response to the above headline, actually. I didn’t know about them myself until recently. A “turtle clip” is a mic clip with a little wire bail over it. The wire is there to keep fabric away from the mic, preventing clothing rustle. 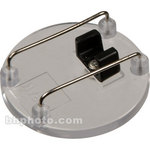 A commercially available turtle clip for a Tram lav

If you’re flush with cash and short on time, you can buy these from B&H for $20 apiece. Or you could make them yourself. All you need are some bits of copper wire, something round (like a dowel or broom handle) to use as a former, a pair of needlenose pliers, and a pair of cutters. Optionally, you can use a soldering iron if you want to get fancy, but it isn’t required. The clips that I made require a bit of Topstik or Moleskin to secure the mic, but they work as well as the ones from B&H.

Any round object will do as a former. The size determines the diameter of the finished mic clip… about a half-inch or three-quarter-inch rod will do. Wrap the wire around the former as if you were winding a spring one and a half turns. It’s easiest to wind a little extra and then clip off the excess wire later. 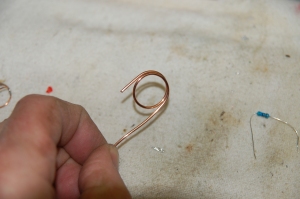 Starting a turtle clip. Copper wire is wound around a round former, 1 1/2 turns

Now, using the needlenose pliers, bend a half turn of the wire up 90 degrees. Clip off any excess wire and you’re done, unless you want to solder the ends. Soldering only takes a second and does make the finished clips a tad stronger and smoother, but it isn’t required. If you haven’t done much soldering before, this step could be

Bend one of the loops 90 degrees. I used a vise, but pliers can work fine for this.

Once you’ve made a few of these, other variations and improvements will surely come to you…

Snipping off the excess wire. Having a little extra wire makes handling these a touch easier while you make them.

making clips with two bails, for example, or rectangular shapes rather than round. They will get rather bent out of shape with regular use, but they’re easily replaced and cost only a little time. And if you’re too busy to take the ten minutes it takes to make these, I’ll be happy to sell you some that I’ve made… only twenty dollars each!

My collection of homemade turtle clips. They didn't take long to make, and they get easier with a little practice.

4 responses to “How To Make Turtle Clips”