Like many folks, I’ve been using a Zoom H4n 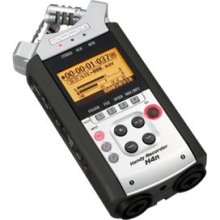 as my bag recorder for awhile now. But I recently acquired a Sony PCM-m10. This post will compare the two for use as a location audio-for-video recorder. My recorder of choice is an Edirol R4Pro, but it’s too large to use in a bag along with a mixer. What we’re after here are small, palm-sized 2-track recorders, and there are several to choose from.

My Sony PCM-m10. The front panel layout is fairly straightforward.

The Zoom is a good recorder, and has a number of useful features that aren’t available on many other recorders. These are easily discovered through any web search, but the major points are 4-track recording ability, and XLR inputs. But like everything in life, there are drawbacks… at least in my application. These are:

Lousy battery life– There’s no getting around it, the H4n is a power hog. Used as a straight recorder, I get about four hours from a pair of AA alkaline batteries. I’ve been on shoots where I’ve drained two sets in a single day, and the stress of starting a take with a low battery  indicator has to be experienced to be fully appreciated. Or worse still, putting in your last pair when you’re a mile and a half in the woods… and your extras are back in the car. My workaround has been to use very expensive lithium batteries, which will last nearly three shooting days. The folks at Zoom realized their design was a bit thirsty, and they put in a “stamina mode” switch on the back.

This will extend the battery life by disabling some features, but it limits your sample rate to 44.1/16 bit. As Beldar Conehead would say, “Mips!!! Unacceptable!!!” If you’re too young to understand the reference, I’m sorry, but your cultural education needs some work. Do the research. 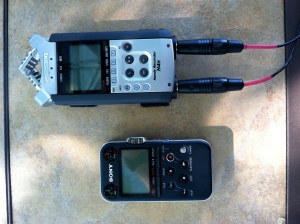 The Zoom H4n is bigger overall, and the larger input connectors makes a slightly cumbersome package in a bag.

Picky Line Inputs– the 1/4″ inputs on this unit are high impedance ins. These are great if you want to plug an electric guitar directly into the unit, but for a mixer tape out… not so much. I know, you can buy a cable with a built-in pad, but it’s still a pain in the butt.

Fragile Form Factor- the adjustable mics on the top of the unit are nice for grabbing a quick stereo soundfile, but when used in the bag they tend to be somewhat vulnerable. The big 1/4″ connectors means it usually lives in the bag mics-down, and I worry that these may someday break.

4-Track Limitations- While the zoom H4n is widely advertised as a 4-track recorder, the implementation isn’t as great as it could be. Yes, it can record four tracks at once, but two of those tracks are intended to come from the unit’s onboard mics. There is a 3.5mm jack that can bypass those mics, but this is still a bias-powered mic level input. It can be made to work with yet another padded cable, but doing so involves such a web of special cables and workarounds that I’ve never tried to do a 4-track recording in the field. 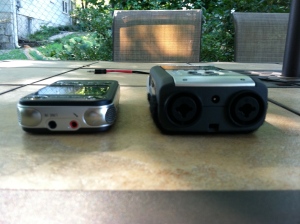 The Sony is thinner than the Zoom, but this is a limitation of the XLR connectors.

These drawbacks led me to search for a better solution for recording in the bag, so I’ve gotten a Sony PCM-m10. For my application, the Sony is a better choice, because:

Line Inputs– At first glance, the 3.5mm stereo line in jack would seem to be a downgrade of the balanced ins on the Zoom, but since these are true line-level ins, this isn’t the case. Levels match fine from my mixer tape out using a plain 3.5mm stereo cable. Plus the Sony has a rotary input level control, so adjusting levels is a bit faster that setting a level using an up/down button, as it is on the Zoom. It is slightly more likely to accidental adjustment through careless handling, though.

Battery Life– Power management is vastly improved over the Zoom. The manual says to expect around 4o hours from a set of batteries… less if you use higher data rates. I record at 48k/24bit, and I can get more than three full days of work from a single set of alkaline AAs. The stress relief alone is a big value for me, as I’m not having to constantly check my battery level.

Compact Case- While I’d think these are about the same in terms of their fragility- both are basically built with plastic cases and could be damaged from extreme handling- the Sony is smaller and rectangular. The Zoom is slightly larger, but the bigger 1/4″ jacks can place more leverage on the connector itself, plus the irregular shape makes me think that of the two, the Zoom is going to be more likely to break over time. (I do plan to make a mic guard for the Zoom that screws into its tripod mount, but haven’t managed to find time for that experiment yet.)

The Zoom usses buttons to set the record level, while the Sony uses a thumbwheel. This isn't a digital encoder, either, but an analog level control.

Better Filenames- Though this seems a little nitpicky, I do like the filenaming convention on the Sony better than the Zoom. The Zoom gives each recording’s filename in a given folder a sequential number, starting at 001. The Sony does the same thing, but it adds the date at the head of each filename. This way it’s a little easier for me to tell what’s in each file without having to open it up and listen to it… handy if I’ve been shooting for four days and neglected to download. It just adds a little confidence.

There was one situation where I was glad I had the Zoom. I needed a lav mic on a motorcycle, and  expected the talent to drive out of wireless range. Using the Zoom, I plugged in a hardwire mic directly to the H4n’s input, started the recorder, and put the whole package in the bike’s saddlebags. You couldn’t do this with the Sony… at least not with a hardwire mic. I did some experiments by plugging in various mics with 3.5mm jacks into the Sony’s input, and  it turns out that mics wired for Sony’s UWP transmitters will work fine plugged directly into the input jack… a neat trick in a smaller package. Not so with mics wired for the Sennheiser G3 series, though.

While both are fine recorders, I think overall I prefer the Sony. In fact, I’ve ordered a second one. The idea is to use a pair to record iso tracks from my wireless units, then sync them after the fact using Plural Eyes software. I’m still running tests to figure out the best way to pull this off… the results will be in another post.

To be fair, I haven’t tried some of the other palm recorders available from Edirol, Fostex, Tascam, Marantz, Roland, and others. These two recorders are the ones that I own. (I’ve no connection with either company, nor have gotten any freebees or discounts from anybody. I’d be happy to take some, though.)