Building a Studio- The Soundcraft 800

Work on my new studio space continues steadily. And while things aren’t necessarily moving as fast as I’d like, I’m getting things done one job at a time. Today was blowing insulation day, which was a messy, nasty, dusty affair. But it’s 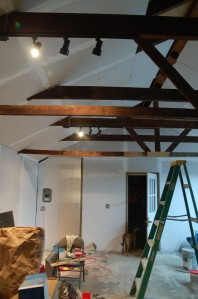 also probably the most effective low-cost solution for my roof space, as it pretty much fills all the gaps between the drywall ceiling and the underside of the roof deck (with a layer of QuietBrace screwed on for better isolation). 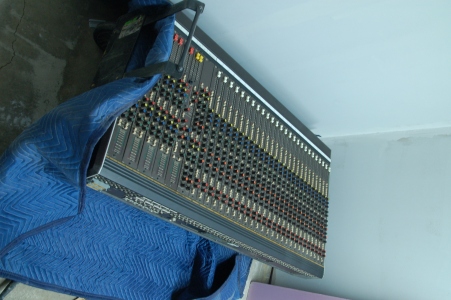 Old Busted or New Hotness? Depends on who you ask, but probably a little bit of both... my Soundcraft 800

And just as I was getting completely overwhelmed by the magnitude of remaining jobs I have to do, I gave myself a morale boost by taking delivery of the centerpiece of the studio, a Soundcraft 800 26-channel mixer. While it looks impressive (to me, at least… but some say I’m easily amused), it has some issues with the master section that will need to be addressed. The age of this mixer means that it will pretty much need a full rebuild.

I’ve already corresponded with the good folks at Creation Audio Labs in Nashville, they specialize in mixer rebuilds. (There was a great article by Rob Tavaglione about rebuilding a Soundcraft Ghost in a recent issue of Pro Audio Review.) I’ll be doing some of the upgrades myself, and I’m going to let them do some of the work. Part of the reason I wanted an older Soundcraft was the individual channel strips… this makes regular maintenance and repairs much easier than a newer mixer like the Ghost.

While this mixer isn't quite as nice as the Soundcraft TS12 that I formerly used, it didn't take four guys and a truck to move, either. While it's certainly a "midsize" mixer, these are a more practical choice for a smaller studio like mine... and they are a lot easier to resell when the time comes.

Fortunately, this mixer came complete with the original owners manual with schematics, a newly recapped power supply, and a bag of extra parts. The extra parts are a bit concerning… it means somebody has been poking around under the hood with a soldering iron, which can be a bad thing if the maintenance maverick isn’t particularly skilled. Since the electronics bench is a part of the studio, I won’t be able to start work on the mixer until the studio is complete. Fortunately, I’m not facing a particular deadline, so I can take the time to do things properly… but I’m sure anxious to start working on it.

The nameplate on the mixer gives a clue to its age. This one was built, I believe, around 1981. Note how the connectors are individually screwed to the chassis and not held in place by a common PC board... common in older gear. The downside is that connectors often need to be replaced... tedious because there are so many, but a fairly easy upgrade.