Most of the DSLR shoots I’ve worked on have been fairly simple affairs, at least in terms of synchronizing the sound… mostly because there weren’t any other options. These shoots are done old-school “double-system,” where the camera records the visuals and the audio is recorded with a separate recorder. We used to use a Nagra for this (which is still a desirable piece of gear… one day I’ll find one that I can afford.) A standard slate is used at the head of each take to provide a marker for the editors. They line up the little bar of the slate with the crack of the slate’s clapper on the waveform, sliding the audio around until they match, and then the audio is locked to picture. Many folks are using PluralEyes to speed up this process. But if you’re doing a long-form production with a lot of takes, manual sync can become a fairly large chore.

The Ambient Lockit Buddy in the hotshoe mount

I did a shoot recently where the production house supplied an Lockit Buddy (built by Freelance Audio Visual Services in the UK) along with an Ambient Clockit Box (we used an ACL 203) timecode generator. Ambient timecode generators have been around for a long time, and are proven pieces of kit… though they are expensive little morsels. What’s new is the Lockit Buddy. This is  a small passive device designed to drop linear timecode down to mic level, allowing it to be recorded on the DSLR’s right channel. You can also feed a reference audio track to go on the left channel, if you have an extra wireless or line level out. The Lockit Buddy doesn’t generate its own timecode, and requires some sort of timecode signal for it to work… either generated as it was on this shoot, or a feed from a timecode out from a timecode-capable audio recorder (My Edirol R4 Prohas a BNC timecode out that would be perfect for this application, but the DP didn’t want to be tethered to my recorder) or a video camera. 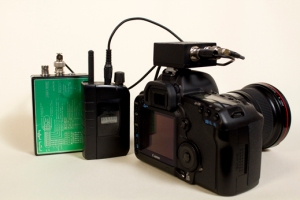 A typical Lockit Buddy setup. Note that there’s no provision to mount either the wireless receiver or the timecode generator… not ideal for handheld shooting or tight production schedules

In use, the Lockit Buddy worked pretty well. We would jam sync the recorder at the beginning of the day and then disconnect the two (with both the recorder and the master generator running in “free run,” of course). The generator and lockit buddy combination was a bit cumbersome on the camera. The Lockit Buddy comes with a hotshoe mount, but not the lockbox, so we had to tape everything on top of the camera. The assembly was  constantly slipping out of the hotshoe mount. Because of the mounting difficulty, we didn’t use the wireless receiver on the camera. But it did work. I’ve even got my own Lockit Buddy on order, as they’re not too expensive (around $140).

setting the sound recording level manually is required for the timecode signal to work, though the constant level of LTC would likely override the audio gain setting of the camera. Sudden loud bursts of noise may cause the level to fluctuate in auto mode, however, causing potential sync problems.

Unfortunately, the post work is being done in the UK, so I can’t report how seamless the system is on the backside. I understand they “had some trouble syncing up the takes,” but they didn’t elaborate. Still, if a scratch audio track is fed to one side, one could still use PluralEyes if the LTC signal somehow failed to lock up. Using a slate is, needless to say, mandatory. And there is more info about the post process on the Ambient website.

While I like the Lockit Buddy, there are some improvements that I’d like to see… maybe in version 2.0. A full-sized XLR connector with a mic/line selector switch would be a big improvement, and wouldn’t require any active circuitry.  This way a DP could plug in a basic mic for an audio scratch track, without requiring a tether to the soundperson. The TA3 connector means that special cables must be built to get audio into the camera, and an additional 3.5mm female jack would be highly convenient. I may do that modification myself, once mine arrives.