After my last post on an inexpensive 5.1 workflow, a reader (Peter Tooke… thanks, Peter) advised me to look into the double mid-side technique. This is a method used for 5.1 surround sound recording that I’ve seen used on feature films, and while it can be a little complex to wrap your head around, it’s pretty neat.

The “mid-side” mic technique is a method of recording stereo using a cardioid mic facing forward (the “mid” mic) and a bidirectional, or “figure-8″ mic facing left and right (the”side” mic). These mics require a little processing at the mixer, though, before we get a stereo signal. 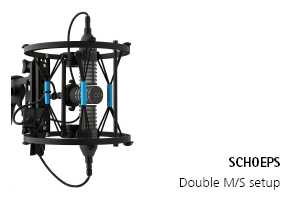 The mid mic is panned to the center, but the side mic is split into two equal signals. You can do this analog using a transformer-balanced splitter, or digitally by copying the input to duplicate channel. Pan one of these mid signals hard left, and pan the other hard right, but… and this is the key… invert the phase on the right channel.

The beauty of the mid-side technique is that if the left and right channels get summed together for a mono signal, you get no phase cancellation between the two signals. We used this technique in the early days of television, when some of the sets were mono and some were stereo. Using mid-side stereo, both stereo and mono televisions sounded fine. (More details about the mid-side technique are here.) 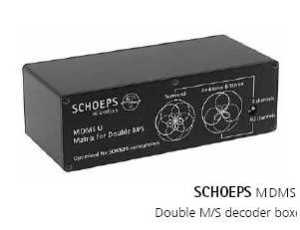 The double mid-side technique is an expansion of the mid-side technique. By simply adding a rear-facing mic we now have a system that can generate five channels of audio using only three tracks. Use a shotgun for the main mid mic, add a bidirectional mic for the side signal, and a cardioid rear-facing mic. The side signal is shared between the front and the rear mics. Each mic is recorded on its own track.

The Schoeps double mid-side recording solution has the advantage of the entire rig being able to fit inside a zeppelin.

Shoeps has a good bit of information about double mid-side technique on their website, including some elegant hardware solutions for implementing this system in the field. Hang on to your wallet, though, cause this ain’t a Chinese knockoff… it’s some serious hardware that is priced accordingly.

A screenshot from the free Schoeps double mid-side plugin