Capturing Audio in a Race Car

I’ve just wrapped on a commercial for Volkswagen that went outside the usual scope of work. The client needed to capture dialog inside a drift racer operating at speed. The driver was Tanner Faust, formerly of Top Gear America, and his “co-pilot” was cyclist Tim Johnson. This rather lousy iPhone video shows an example of the kinds of speeds we’re talking about:

Getting a Decent Signal

Most race cars these days are equipped with radio comms so the drivers can communicate with the pit crew, but I don’t like to rely on other systems as you never know if they’ll work or what sort of quality you can end up with. Conventional lavs wouldn’t work either because of the noise inside the car. I decided to go with an earwire-type lav, since the only chance of overcoming the background noise would be to get the mic as close as possible to the source. And as this would be such a lousy ambient environment, I decided that an expensive mic like a Countryman B6 would probably be pointless. I found a fairly inexpensive pair of earwires that had a 4-pin connection that would need to be changed over to a 5-pin. This turned out to be a bit trickier than I thought, as the mics came with a microscopic surface-mount circuit board inside the connector which needed to be retained. I managed to cut the old connector out and resolder in the new connector by applying large doses of profanity to the solder job. It worked in the end.

Of course, this style of mic is visible, which is rarely acceptable in a commercial. But in this case, it was either that or nothing… as in recording MOS (without sound) and then looping in some dialogue over car noises. This wasn’t really an issue, though, since all the interior shots would be from GoPros (eight in total) and all these were set to fairly wide angles. Tanner’s mic was hidden by his helmet… only Tim’s was visible, and being flesh colored on a wide lens, it was barely noticeable. 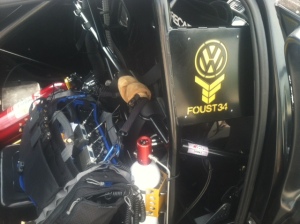 My bag in position inside Tanner Faust’s Jetta.

The next issue was dealing with the distance. I didn’t have time to build a pair of custom antennas for my transmitters… putting the antennas outside of the metal shell of a car will increase transmitter range, but the distances would be too great in this case, and there wouldn’t be a chase car. The only solution was to “drop the bag,” in other words, securing the bag somewhere inside the car, placing it in record, and letting them take off.

The obvious disadvantage is that you can’t properly monitor what is being recorded. I did have a Comtek PR216 monitor transmitter hooked up, and it worked pretty well given the difficulty of the job, but there were lots of dropouts and hits to the signal. But listening to the file after the fact gave a reasonably good result. Tanner’s mic sounds a bit worse than Tim’s… that’s a result of the style of helmet, as Tanner was wearing a closed type, wraparound helmet that pressed the mic close to his mouth, and Tim’s helmet was an open type that allowed the mic to stay in the correct orientation.

I’ll post a link to the finished spot once it gets posted online.