I was asked to do the location sound for a commercial in Atlanta last week for a company called “Fat Hair.” We shot two spots over two days. The camera was a Red Epic Dragon, which is capable of shooting at 6K resolution, but thankfully for the data transfer, we shot the spot at 4K. (If we’d shot at 6k, we’d STILL be waiting on the files to transfer…) 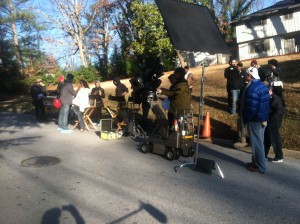 Day one on the Fat Hair set. We had a larger crew than I normally work with, around 30 people. Cold, but thankfully sunny.

My big concern was the timecode. A common response when I offer my timecode gear “that would be nice, but we can’t afford it,” so I don’t get to use this stuff on every shoot. But this time they wanted the full monty. Once I got everything set up properly, it all worked without a hitch. The camera department REALLY appreciated the pack-of-gum-sized Q28 lockbox, since the real estate on Red cameras is very tight. We velcroed the lockbox to the batteries, and other than removing it to re-jam after lunch, we pretty much forgot about it.

Inside shooting on Day 2

The basic workflow is fairly simple, actually. My 664 was  the master clock, set to time of day. The Q28 is connected to the 664 then powered on in order to jam. Same thing with the timecode slate. Both the slate and the lockbox were left switched on throughout the day. Six AA batteries (rechargeable) powered the slate for the entire 10-hour day, while a pair of standard AAAs ran the lockbox. At the end of about four hours, I noticed a drift of about a frame or two on the first day, but less than that on the second day. It might have been due to temperature differences, since we were outside on the first day… the slate would have been colder than the lockbox, as the Red’s camera battery would have kept it slightly warmer as it discharged. Other than that, it was a fairly straightforward shoot. There were only a handful of short lines- a few wild tracks (non-sync). I rolled audio during the high-speed takes just so the camera files and audio files would match up, and maybe there would be some quick sounds that post could use.