I was in Nashville last week shooting for Mike Wolfe of “American Pickers,” a popular reality show on History Channel about finding antiques. Early on, he noticed that American Pickers was popular with kids, so he wrote a book directed to younger readers about discovering local history through artifacts and repurposing old, interesting items. Out of that grew a contest called “Kid Pickers” where kids could show off their finds and submit an essay about it. Three winners were chosen… first place received a $10,000 scholarship.

At Antique Archaeology in Nashville TN (Before the doors were opened!)

We shot at Antique Archaeology in Nashville, TN. Mike is a TN native and sells his finds at his store there. Most of them, anyway- the ribbon mics that he has weren’t for sale. The store was insanely crowded with people once it opened to the public… it’s apparently quite the tourist destination. It’s located in the old Marathon car factory, a very cool brick and timber building in West Nashville that was purchased for a song in 1981 and is now worth millions. (the owner won’t sell… Mike says he’s tried)

It was a fun shoot overall… the winning finds were a beaver skin top hat from the late 1800’s, a tramp art bottle vase that was decorated with old cigar bands, and a precursor to the Xerox machine that was found in an alley. The kids, all about 12, were a bit overwhelmed with all the attention, but they had a good time. I enjoyed meeting Mike, he was very personable and fun to work with. 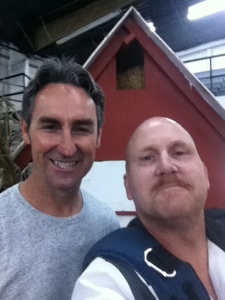 A selfie with Mike Wolfe