NOTE: This mic is for sale… $230, includes a custom built walnut case. Email me for more info.

It’s always fun to get a new mic in the studio. This one is twice as nice, since I built it myself. It’s based on a typical large-diaphragm cardioid pattern mic from China… identical to most of the ones you see from ADK, Behringer, MXL, etc. This one is different. It uses the stock mic diaphragm, transformer, and metalwork, but the circuitry was completely replaced with higher-quality components from Mouser. I got help from the folks on the Micbuilders groupon Yahoo. 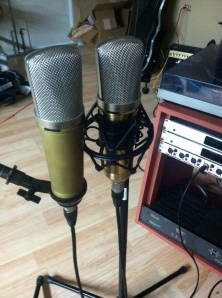 I’ve built a pair of these in the past that were all stock, so I have a baseline to compare changes that I make. This latest mic is better… the difference is very subtle, but I think that I could pick out the modified mic in a blind test. There is a slightly extended bass and more definition overall. This is probably due to the capacitors… the stock mic uses tantalum caps, the mod uses all polyester film and Nichicon electrolytics. I think this probably contributes most to the improvement in the sound.

Some other changes that I’d like to try are some different transformers, though this can be a pretty expensive upgrade with an unknown benefit. Only one way to know for sure. But I’ll likely save that experiment for another mic. Right now, this one is good enough to put directly into inventory to either use or sell. It was a fun build, though mic #2 took me quite a while to finish. I thought I’d popped a JFET, but it turned out to be a bad solder joint on a capacitor that took me forever to track down. All straightened out now, though. 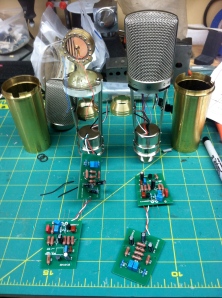 A pair of mics under construction. One of the capsules has lost tension, it was replaced. I’m still having difficulty getting #2 to work… I believe I have a bad JFET caused by me miswiring the transformer.

Making the boards work in the new mic is a trick, since the components are all physically larger, but I was able to coax them into place.