I don’t have a huge collection of lav microphones, but I’ve tried several different models over the years. All of them work amazingly well, though I’ve naturally developed a preference, and I do have one particular model that I tend to use as my “go-to” mic (which I’ll reveal in a moment). 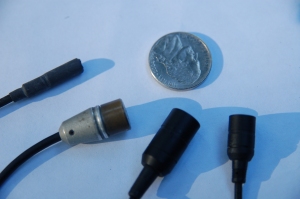 The problem with comparing different lav mic models is that many wireless transmitters use their own wiring conventions. Lectrosonics uses a five-pin connector (a TA5), while Sony and Sennheiser use a 3.5mm jack… and the two aren’t interchangeable. So while I have a fairly diverse collection of lavs, they aren’t all wired to use the same transmitter. One of these days, I’ll get rid of my other transmitters and go “all Lectro,” but that’s a somewhat expensive proposition.

These two mics are the ones I use most often... a Countryman EMW and my current favorite, the Audio Technica 899

There is a really good article about comparing several different models of lav mics at Ken Stone’s website- click here. I haven’t done extensive side-by-side comparisons of all the mics that I have, but I’ve got some favorites. I found a good deal on some Countryman EMWs. These are small, rectangular, side-address lavs, similar to Trams, which are kind of an industry standard. But Trams were too expensive and only available new. The EMWs small size and resistance to handling noise are big advantages and I used these for several years. But then I happened to try an Audio Technica 899 during a 3-person shoot… two people wore EMWs, and one wore an 899. While all sounded good, I was surprised at the reduction in room noise when I soloed the 899… there was a significant improvement in the amount of background noise. Since then I’ve managed to purchase a set of three 899s, and these are my favorite mics in most situations.

Any mic with a larger head is generally not my first choice on the set, since most clients would rather hide the mic in the talent’s clothing, even though this means a reduction is sound quality. My Sony 55b almost never gets used for this reason, even though it’s an excellent-sounding mic. My Lectrosonics mics have some rather questionable-looking cables, so I keep them to use as backup mics.