One of my latest DIY audio projects has been a simple transformer-balanced mic splitter for location work. While you can occasionally get away with splitting a mic signal with a Y-adapter, it can cause all sorts of noise and loading problems. Transformers… if they are high quality… do the job much better. Jensen transformers are famous for this application, but expensive, and cheap, lightweight transformers found in catalogs like Allied and DigiKey don’t handle high frequencies well. After much searching on the internet, I found Edcor audio transformers. This is a small US company that winds audio transformers… their WSM600/600 has a frequency response of 20hz-20kHz, and are affordable at around $12 each (I needed  a four-channel split for my Edirol R4Pro field recorder that I bought from Trew Audio… four signals to the recorder and four identical signals to the mixer that are then mixed and sent to camera.) 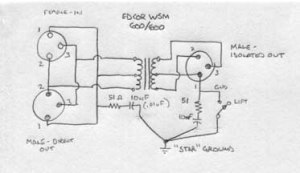 The splitter circuit is pretty simple. It’s developed from the Jensen application notes, more transformer design info can be found at their website.

The circuit is pretty simple.  The only components required besides the transformers and connectors are a 51 ohm resistor and 10nF capacitor for a radio frequency network. I used polyester film caps and metal foil resistors for low noise. A ground lift switch is optional… it isn’t a bad idea because it allows for potential ground loops, but it does complicate the build a bit.

The front and back panels for the 4 channel splitter. There’s barely enough room for the connectors.

I first built a two-channel version, and I’m glad I did… I figured out where my screw-ups were. The case I selected was very tight… too tight for the two-channel version, really, so I was able to devise a better way to locate the components for the four-channel unit. When you build these, it’s best to wait to mount the transformers until after the connectors have been mounted and wired. And it’s difficult to machine the case sides for connectors or switches, you want to use only the smooth face plates for mounting hardware.

Wiring the unit was made easier by not bolting anything to the case before soldering… I made that mistake on my two-channel unit. And I saved a bunch of connectors by hard-wiring pigtails to the two-channel splitter, but it makes it cumbersome to store and vulnerable to damage. I decided to be conventional with the four-channel version and use connectors, but I’ll need to solder up eight short cables to go along with it. Soldering cables isn’t difficult, but rather time-consuming.

The case layout with the transformers in place. They’ll be bolted into position after they’re soldered.

I’ll be adding more info on this project as it develops.

Update: Well, my splitter has been completed for some time now. It works great. In use, it’s a bit heavy… not something I can put in my bag, but it’s normally used on the cart anyway. The size isn’t inconsequential, either, though this is certainly the smallest case that would fit the unit. As it was, I didn’t have room for ground lift switches. Soldering the leads was a bear, because I was trying to keep the leads as short as possible. I used a mini shielded cable that I bought from Trew Audio that is normally used in lavalier mics.

This entry was posted in DIY Location Audio Equipment. Bookmark the permalink.