As much fun as all the latest and greatest software-based audio technology is, I still like old analog circuitry. It has it’s quirks, of course, but there are lots of cases where high-quality analog still sounds outstanding… as good as, if not better than, digital.

The front panel of the HPM-41 mixer by RTS Systems

One of the mixers in my collection is the RTS Systems HPM-41, which is a 4-input mono mixer. Background info on this unit has been very difficult to find. RTS Systems abandoned the mixer business years ago to concentrate on intercom systems for television and broadcast stations. It looks like these were built to compete with the ubiquitous Shure M67 4-channel mixers in use in  just about every radio and TV station in the country. The Shures are built like tanks… dependability is critical in broadcast… but the RTS mixer has some big advantages over the Shure. Some are apparent from the front, and others you can see once you open the unit up.

The rear panel of the HPM 41

Each channel has a two-position pad to drop the input signal 15 or 30 dB. There’s also a 75Hz and 150Hz high-pass filter, and a real bonus, individual limiters on each channel. On the back, each channel can be phase inverted, and channel 1 and 2 has phantom power, which can be switched between 12v A-B powering or 48v phantom. (I like this arrangement better than my brand-new and very expensive Shure FP33 mixer. To change the phantom powering, you have to open the unit up and poke around the battery compartment. It’s tight, your fingers are constantly touching the circuit boards, and it’s easy to forget the settings.)

All the switches on the HPM-41 are recessed toggle switches, which gives the whole thing a higher-quality feel.

This mixer is really heavy. This is due to the large mains transformer inside the unit. While it has a provision for battery power, it’s really designed for stationary operation rather than fieldwork in a bag.

Inside the HPM-41. The large rectangle on the left is the RF shield covering the AC mains transformer.

Once you open the unit up, the differences between this and a Shure M67 become immediately apparent. The pots are Bourns sealed type, probably conductive plastic. These give better performance than the usual carbon type. Four big electrolytic capacitors are also immediately noticed. The 25-volt, 3300 uF monsters will be hard to replace since they are axial-lead type, and this type of lead is not  normally stocked in better grades. Electrolytic capacitors can degrade over time– especially through lack of use– and it’s usual to replace them in vintage equipment. But capacitors that are larger than their minimum requirements do last longer. I’ve even heard it suggested that with caps, more is always better. (but within reason, of course.) 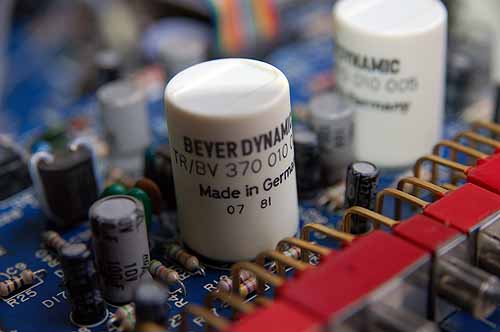 ICs in this unit are 5532s and TLO84s. While there are some other IC’s that might yield higher performance (such as the Burr-Brown 2134), the general consensus seems to be that 5532’s are pretty good chips. Also noted, but not usually seen, are four Beyer Dynamic German-made audio input transformers. Some good info on these and other circuits can be seen on the kubarth site.

The RTS Systems HPM-41 is a comparatively rare mixer. My guess is that these were very expensive units judging from the components, especially when compared to the Shure utility mixers from the same period. I don’t use mine very much… the weight and power requirements mean that I can’t use it in a bag, running around under battery power, which is 95% of my business. And it’s usefulness is further limited by being a mono mixer. But I expect to find a good use for it as a preamp or base for modification. Several ideas come to mind, including placing the heavy power transformer into a separate case, changing out the power plug to a 4-pin xlr, and adding direct outputs. If you happen to find one cheap, I’d go ahead and buy it, or let me know about it. Also, if anyone has any documentation on these, I’d very much appreciate a copy and I’ll add it to these pages.

This entry was posted in Vintage Audio Gear. Bookmark the permalink.